Daddy's Dyin' Who's Got the Will? by Del Shores 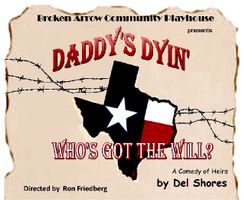 BROKEN ARROW COMMUNITY PLAYHOUSE Presents “Daddy’s Dyin’ Who’s Got the Will?” A comedy by Del Shores Tickets are on sale now at www.bacptheatre.com or Call our Box Office 918-258-0077 to reserve your seats today! Lower Level $18 Balcony Level $13. The Broken Arrow Community Playhouse is excited to present the uproarious and heartfelt comedy “Daddy’s Dyin’ Who’s Got the Will?” by Del Shores. October 12, 13 and 14, 19, 20, 21 2018. Fridays and Saturdays at 7:30 PM Sundays at 2 PM here at the playhouse located at 1800 S. Main Street in Broken Arrow. This production is rated PG-13 for Adult and Politically incorrect language. “Daddy’s Dyin’ Who’s Got the Will?” takes place in the summer in a small Texas town in anytime, U.S.A., and follows the adventures of the Turnover family as they try to settle Buford Turnover’s affairs before he inevitably kicks the bucket. The problem is, Buford (Tom Berenson) has misplaced his will, and it is up to his four children— the spinsterish Sara Lee (Christie Romo), the estranged preacher’s wife Lurlene (Lori Giles), the beer-swilling Orville (Mike McEver), and the country singer wannabe Evalita (Kelly McEver)— to find it. The Turnover family is less concerned about Buford’s will, and more with bickering amongst themselves about who wronged whom in the past. Sharp-tongued Mamma Wheelis (Jan Kendall) and Evalita’s hippie boyfriend Harmony (Ozzy Osborne) and Orville’s wife Marlene (Kelley Friedberg) try to keep the peace, but even they cannot stop the family from falling apart at the seams. Hilarity, as they say, ensues. Director Ron Friedberg is no stranger to the BACP, over the past 25 years he has served on our Board of Directors, acted in numerous roles onstage and directed the successful “The Odd Couple Female Version” in 2013. Ron has been active onstage and off for more than fifty shows throughout the Tulsa/Broken Arrow area. We are happy to have him back at the BACP. Ron has chosen a wonderful cast of BACP veterans and newcomers that are sure to bring this dysfunctional, irreverent, politically incorrect family to life on our stage. More information for this production can be obtained by calling the BACP at 918-258-0077. The BACP is located in The Main Place at 1800 S. Main in downtown Broken Arrow. “Daddy’s Dyin’ Who’s Got the Will” is produced by special arrangement with Samuel French, Inc. The BACP would like to thank Landmark Business Systems for their generous sponsorship of the 2018-2019 Season. The Broken Arrow Community Playhouse is a member of the Oklahoma Community Theatre Association and the American Association of Community Theatre.