During the launch of Apple’s new iPhone 14 Plus at the Penn Square Mall in Oklahoma City last week, employees were focused on assisting the hundreds of customers who came through the store that day.

But while they were working, management pulled employees out of the store for one-on-one and roundtable meetings in a vacant Banana Republic nearby. Employee Sherri Sharp said the meetings meant customer service suffered.

"It’s always impactful whenever all of our regular managers are out of the store. We had very long waits and long lines to get repairs," Sharp said.

These meetings have been going on since last month, when a majority of the employees signed a petition to join the Communication Workers of America union. While Apple has received union-busting complaints from both the Penn Square Labor Alliance and the National Labor Relations Board, employee and union organizer Michael Forsythe said social media — in this case, Discord — allows them to share information without fear of retribution.

"Management has to do all their union busting within a 4 to 8 hour shift that every employee has every day. If we have a digital space like this, we have control of that 24/7," Forsythe said.

Much of this momentum follows CWA’s Campaign to Organize Digital Employees and their decision to focus on Apple retail workers earlier this year.

Sharp, who is also a union organizer for Penn Square Labor Alliance, grew up in a union family and was a CWA member in the past. She said those experiences combined with disappointment with the promotions process is behind her support of the union.

"We sit here and we - crickets. We sit here and we wait. And nobody so far has been able to say, ‘hey, about that promotion process that you’ve asked and asked about, this is going to be the new change.’ And I think we’re just trying to find a pathway around the brick wall that we feel like we’re running into on a regular basis," Sharp said.

Another issue is the matter of bilingual pay. Employee and union organizer Kevin Herrera said his ability to speak Spanish with customers has become a significant part of his job, but he is not compensated for it.

"It got to the point where some days when we had high traffic, there was lines of people saying to an hour and a half waiting to speak to me because they wanted somebody that spoke the language," Herrera said.

Herrera said bilingual or multilingual employees play an important part of providing good customer service to people who sometimes come from hours away for an in-person experience as the Penn Square location is one of just two Apple stores in the state.

"A lot of the time, you know, the customer doesn't feel comfortable using Translate because they feel like their message is lost in translation. And sometimes it is. And so it's easier for me to sometimes pop up as someone who speaks Spanish and be like, ‘hey, how can I help you?’," Herrera said.

If the Penn Square Labor Alliance wins their election, they’ll not only become the second union Apple Store in the country - they’ll join the growing community of retail unions in Oklahoma City.

Forsythe said PSLA has received support from local Starbucks union organizers and that he wants the labor alliance to make a difference in the community, not just in their store.

"I really hope that this kind of reinvigorates the labor movement further and gets more locations, whether it's Apple or not, whether it's local Trader Joe's or Home Depot's, whatever it is," Forsythe said. "I hope more people start fighting to take their seat at the table. And I hope that we can show up and do what we can in solidarity to support them."

Whether or not the Penn Square Apple Store will join Communication Workers of America will be decided after the National Labor Relations Board counts the votes from this election in the coming weeks.

KGOU is a community-supported news organization and relies on contributions from readers and listeners to fulfill its mission of public service to Oklahoma and beyond. Donate online, or by contacting our Membership department 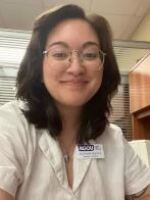 Hannah France
Hannah France started her work in public radio at KBIA while studying journalism at the University of Missouri. While there, she helped develop and produce a weekly community call-in show, for which she and her colleagues won a Gracie Award. Hannah takes interest in a wide variety of news topics, which serves her well as a reporter and producer for KGOU.
See stories by Hannah France