Native films, filmmakers from Oklahoma and beyond make a splash at Sundance

Mvskoke Media reporter Angel Ellis found herself in the middle of one of the biggest stories in the Muscogee Nation in several years. It’s unusual seeing as how she's used to being the one reporting the story-not being a part of it.

Ellis' journey as a journalist amidst her tribal nation's fight for a free press is the subject of Bad Press, a film by Native American Journalists Association Executive Director Rebecca Landsberry-Baker and Joe Peeler, a documentary editor and director whose work has appeared on Netflix, HBO and FX. The film documents the role of a free and independent press in tribal governments. Only five tribally run media outlets have a free press — and three of them are in Oklahoma.

"One of the things that I want fellow tribal citizens and those in Indian Country to come away with after having watched our film is that, you know, free press in Indian Country supports tribal sovereignty," Landsberry-Baker said.

Bad Press is one of many movies at the Sundance Film Festival in Park City, Utah by Indigenous filmmakers from across the country — including Oklahoma, where they were filmed with local support and crew.

"Fancy Dance follows a queer Native American woman whose sister has gone missing, and she's left as the unlikely caretaker to her 13-year-old niece," Tremblay said. "The film follows as the two of them go on a search together to find the missing sister. And it's a bit of a, you know, family story and also a coming of age story mixed in with, obviously, this quest for these two women to find their missing sister/mother."

In the backdrop, Jax is preparing her niece for her first powwow as a fancy dancer. But the film explores deeper issues like the importance of keeping Native families together and the crisis of missing and murdered Indigenous women — something that has plagued communities for decades.

Indigenous filmmakers have found support at Sundance for four generations, according to the organization's website. In 2004, the Sundance Institute started the Native Lab-which has been nurturing and supporting filmmakers like Taika Waititi, Blackhorse Lowe, Shaandiin Tome and Sterlin Harjo. One of Harjo's first films, Four Sheets to the Wind, was supported by the Sundance Institute and won several awards at the 2007 Sundance Film Festival.

Tremblay, who is Seneca-Cayuga, and co-writer Miciana Alise were part of Sundance Institute's 2021 Screenwriters Lab where they developed Fancy Dance. Tremblay's short film Little Chief, which was also shot in Oklahoma, premiered at the 2020 Sundance Film Festival.

Sundance wasn't the only organization that supported Fancy Dance. The Cherokee Nation Film Office also made the film a reality.

Both the Cherokee Nation and Tulsa Film Offices helped Tremblay with locations and an incentive program, which launched last year. She said that helped her find places to film that were similar to her community in northeastern Oklahoma.

Oklahoma based IllumiNative will also host “Indigenous House,” an inaugural event to connect Indigenous filmmakers from all over.

"“The entertainment industry has always been one of the biggest perpetrators of our erasure, but Native peoples have flipped the script and are breaking barriers and making incredible strides in representation. The Indigenous House is a celebration of the contributions made by Native creatives, artists, filmmakers and the creativity, beauty and strength of Native peoples,” IllumiNative founder and Executive Director Crystal Echo Hawk said in a statement to Variety magazine.

Tulsa Artist Fellows and filmmakers Britt Hensel (Cherokee), Blackhorse Lowe (Diné) and Kyle Bell (Muscogee), will take part in a panel about their work and creative process. The panel will be moderated by Tulsa-based producer Dylan Brodie, whose credits include Fancy Dance and Reservation Dogs.

Bad Press also received support from Sundance Institute's documentary program and NBCU Academy as part of NBC Original Voices Fellowship. Landsberry-Baker started working on the film in 2019, shortly after Muscogee Nation repealed its 2015 Free Press Law in the fall of 2018. The film follows Ellis who is, "just trying to do her job," by talking to citizens, covering the 2019 election which brought the current Principal Chief David Hill to power. Ellis was fired in 2011 for reporting on a story, something journalists who work for tribally run media outlets fear.

"She knew from moment one that this was absolutely necessary for journalists to do their jobs and by extension for the citizens to get the information that they deserved," Peeler said.

"And I think the point in filming is really the point in the film where I hope that the audience understands how dedicated and kind of how much she's been affected by the lack of free press."

Muscogee Media eventually had their free press protections restored in 2021.

Both Landsberry-Baker and Tremblay say it's important to have Indigenous people tell these very important stories from their own perspective.

In Fancy Dance, Tremblay made a decision early on in how she was going to portray the topic of missing and murdered Indigenous people, a topic that because of the violence involved can trigger Native communities.

"So for us, it was really important that we don't like, delve deeply about the violence that anyone is, you know, being subjected to. We knew before we put a pen to paper that we would never see the body of an Indigenous woman," she explained.

Tremblay is currently in the development phase of a project based on the Pulitzer Prize finalist book Yellow Bird with Harjo.

Landsberry-Baker said she hopes the film inspires tribal citizens to be more engaged in their elections and communities.

"I would really love to see more Muskogee Creek voters and voters across Indian country be involved with their tribal government in tribal elections and be engaged citizens because one vote can make all of the difference," she said.

Here's a list of more Native films screening at the festival: 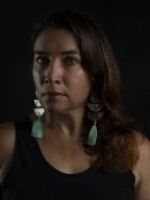