After airing re-broadcasts for several weeks since I couldn’t go in to the Public Radio Tulsa studios during our stay-at-home orders, I was able to get some basic gear set up to produce The Rhythm Atlas from my home office. (As you can see, this room also serves as the repository for my lifetime of record collecting.)

I’m really happy to be creating new shows again! Although live performances have stopped temporarily, there’s no lack of excellent new music being released around the globe. I’ll be featuring some of that new music on upcoming shows. This Sunday's program (April 26, 2020) will include pieces by Ethio-Jazz legend Hailu Mergia; a fascinating collaboration between banjo player Abigail Washburn and guzheng (zither) player Wu Fei that merges American old-time music with Chinese folk song; and London’s Iyatra Quartet, whose beautiful compositions are inspired by English poetry, Indian ragas, and Arabic love songs.

I hope you can tune in Sundays at 6 p.m. on KWGS 89.5 FM for fantastic folk, roots, and fusion music from all around the world! LISTEN LIVE 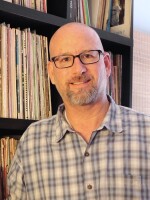 Denis McGilvray
Denis McGilvray is not an ethnomusicologist, but he plays one on the radio. He started hosting The Rhythm Atlas world music program here on KWGS in September 2017.
See stories by Denis McGilvray