From Vinyl To MP3: 50 Classic Celtic Songs That Shaped The Thistle & Shamrock

Much has changed since 1983, when I first took to the national airwaves. The awareness of musical roots connecting Appalachian and Old Time music to the British Isles and Ireland honors fully the diversity of influences from which it grew. America's interwoven culture is always at its most enthralling and enriching when we hear every voice and all its textures are equally visible. In 2019, Carnegie Hall's landmark festival Migrations: The Making of America showed how American music has and continues to develop through the movement of people who are displaced by varying circumstances. The legacies of Scotland and Ireland's transatlantic crossings provided a focal point for the festival, of which I was proud to be a partner.

Thinking back to 1990, when NPR first partnered with me in presenting The Thistle & Shamrock®, I remember talking about the show as an open doorway to a world of evolving Celtic music traditions for public radio listeners. Back then, I could have never imagined how far and wide that door would swing my way, too. How could I resist exploring the landscape where public radio thrives?

Like a collection of neat boxes and peculiarly shaped jigsaw pieces, each state is clearly delineated on the political map of the United States. Yet the names and dimensions of these 50 territories cannot begin to describe — let alone contain — their countless communities. Dynamic neighborhoods have spilled across borders; ignoring state boundaries, they spread in every direction. Curious ears can easily detect the currents of diverse sounds. These are the songs that standard maps will never reveal. But with music as my roadmap, they make fascinating detours into America's heartlands and hinterlands.

In 1991, a conference in New Orleans presented the chance to follow in the footsteps of Professor Longhair, Dr. John and The Neville Brothers to cohost an NPR event at the legendary Tipitina's — a former gambling den and house of ill repute. After the conference, I headed to Baton Rouge, La., to host a fundraising event for WRKF. It was held in Mulate's — another music heritage spot in Louisiana — a renowned Cajun restaurant and dance hall. I cohosted breaks live and on-air from the dance floor and twirled a Cajun two-step with just about every station supporter. When I collapsed in a chair to catch my breath, the Cajun band took a break. The Celtic four-piece picked up and continued with sets of reels and jigs. From the Canadian Barn Dance to the Cajun Jitterbug, the intense fusion on the dance floor spoke to the potency of Louisiana's musical traditions.

It was January 1994 in Alaska's interior when the kilted piper met me from the plane in the Tanana Valley. My most adventurous public radio station visit saw me fly from Scotland to Fairbanks, Alaska, at the invitation of KUAC and the Fairbanks Red Hackle Pipe Band. I filled a few days with broadcasts, supporter events, dog sledding and dancing with indigenous Alaskans. I met remarkable Gwich'in people, whose Athabascan fiddle traditions were acquired from 19th century Scottish, Irish and French Canadian fur traders. They displayed tremendous pride in their musical heritage, recounting details of this specific music migration as it was passed down through indigenous Alaskan oral tradition. I returned home revitalized, dedicated and amazed that a weekly radio hour could be exchanged for such riches.

Some years earlier, in 1990, I hit the road for my second public radio concert tour. Our faded Nashville tour bus meandered along the eastern seaboard, no further west than Memphis. In 1954, a young Elvis Presley played his first public concert at the legendary Overton Park Shell (now the Levitt Shell). Juxtapose that scene to one, 36 years later: a half-dozen, travel-weary Celtic musicians land on the same stage with a live version of The Thistle & Shamrock®, for a concert sponsored by WKNO. An ancestor of the Presley family had left Scotland for the Carolinas in 1745; it's easy to imagine that the same forefather may have known some of the traditional songs and tunes we performed that night, before the same footlights that witnessed the debut of "That's All Right (Mama)."

We archive the images from nights like these in our own memory; recordings of the occasions simply don't exist. Fast forward to our current moment and any one of these nights would have been preserved for all to see on YouTube. Nowadays, even the rarest of vintage vinyl collections are uploaded online. The riches of field recordings, once tied to geographical locations, are accessible worldwide — both to researchers and sleuthing musicians. A younger generation of Black women artists can rediscover and reclaim the banjo as an African instrument, while young ballad singers can access sound archives to learn from tradition-bearers now long gone. It reminds us to be tradition-bearers: talking to family members, friends and neighbors, so that treasured life experiences and cultural heritage is captured, preserved and shared. A flicker of curiosity is all that we need to follow a trace of melody, a scrap of verse or a story — to tease it apart and wonder, "Where did that come from?"

Fiona Ritchie is the founder, producer and host of NPR's The Thistle & Shamrock®, first aired nationally in 1983 and via NPR since 1990.

In four decades of hosting The Thistle & Shamrock®, I've had a great time listening to thousands of albums, delivered on everything from vinyl to MP3. For NPR's 50th anniversary, I've handpicked 50 classic Celtic songs and instrumentals by passionate performers from the last 50 years. Each track plays a part in defining the sound of The Thistle & Shamrock®. 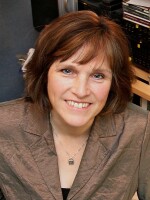 Fiona Ritchie
Fiona Ritchie strolls along the main street of a small village in rural Scotland and steps through the plain doorway of an 18th century stone building. Passers-by would find it difficult to imagine what this simple gesture initiates: a weekly connection with devoted public radio listeners throughout the United States. In over two decades of broadcasts, Ritchie's radio program The Thistle & Shamrock has become one of NPR's most widely heard and best-loved music programs. She has entered the lives of millions of Americans by way of an inconspicuous studio door, thousands of miles away in Scotland.