A Conversation with Filmmaker Sam Pollard

Acclaimed documentary director, editor, and producer Sam Pollard joins us to talk about his recent films Black Art: In the Absence of Light, MLK/FBI, and his storied career. From serving as Spike Lee's longtime editor (Jungle Fever, Clockers, 4 Little Girls) to directing one of the earliest films on the 1921 Tulsa Race Massacre (Goin' Back to T-Town, 1993), Pollard has made an indelible impact by telling Black stories through film.

Hosted by Jeff Martin with Philbrook Museum of Art and produced with Public Radio Tulsa. 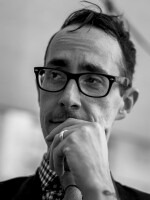 Jeff Martin
Jeff Martin is the Online Communities Manager for Philbrook Museum of Art. In his spare time, he's also a writer and editor. His most recent book, The Late American Novel: Writers on the Future of Books, was praised in The Economist and The New Yorker, and was selected as one of the Essential Summer Reads of 2011 by The Atlantic. Jeff is a longtime columnist for TulsaPeople magazine and the founder of the literary organization, Booksmart Tulsa.
See stories by Jeff Martin