TheRese Aduni has been hard at work on her documentary, "Rebuilding Black Wall Street." The film uses 16mm film footage shot by TheRese's father and chronicles the men and women who rebuilt Greenwood in the aftermath of 1921. This episode also features artist William Cordova, one of the Greenwood Art Project's two lead artists. Co-hosted by GAP Project Director, Jerica Wortham.

Hosted by Jeff Martin with Philbrook Museum of Art and produced by Rich Fisher with Public Radio Tulsa. 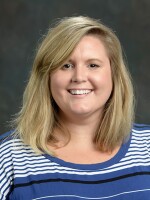 Meghann Ray
As an University of Tulsa alumna, Meghann has spent the past decade in the non-profit social services sector working in communications, fundraising and special events. She is an avid and passionate community advocate and says her life’s mission is to make a difference locally and beyond. Meghann believes Public Radio Tulsa is an integral part of our community and loves how it keeps is all connected and more informed.
See stories by Meghann Ray